With the nation — and the world — disrupted by the COVID-19 pandemic, the Pittsburgh Supercomputing Center (PSC) is answering the call to action. The center has given the national research community expedited access to its systems Bridges; Bridges-AI; and Anton 2, a special-purpose supercomputer for biomolecular simulation designed and developed by D. E. Shaw Research (DESRES) and hosted at PSC.* PSC, a joint computational research center of Carnegie Mellon University and the University of Pittsburgh, is making these resources available through the COVID-19 HPC Consortium as well as PSC’s usual allocation processes through XSEDE, the National Science Foundation’s cyberinfrastructure, and discretionary allocations on Bridges.

In the consortium’s accelerated review process, expert committees meet daily at 11 a.m. They then submit their recommendations to a “matching committee” that determines allocations to each project by that afternoon, with computing available as early as the next morning.

“I am really proud of our team for responding to this national crisis,” says PSC Director Shawn Brown. “As part of the research community, it is critical that we support accelerating the research to find cures, interventions and testing procedures faster as time is of the essence.”

In two separate studies, scientists at Weill-Cornell Medicine have used Bridges to validate and analyze results from a rapid experimental test to identify the presence of SARS-CoV-2 virus and to identify risk factors for bad outcomes in COVID-19 cases.

The 30-minute experimental test, called LAMP, gave results that compared well overall with those of “gold standard” but much slower methods. It tracked how a rare version of SARS-CoV-2 from Europe came to infect over 80 percent of patients in New York City and helped shed light on the relationship between COVID-19 and high-blood-pressure and angiotensin-converting-enzyme-(ACE)-inhibitor medications. LAMP was also able to detect the virus at lower levels than current tests, making less-invasive testing possible. The team’s paper on the work is in press with a scientific journal. Their results led to an Emergency Use Authorization (EUA) approval for the methods from the FDA, among the EUAs reviewed by the group in a correspondence to Nature Biotechnology in August 2020; the LAMP test is now being used in clinical sites around the country.

Another paper by the team, published in Nature Medicine in August 2020, linked variations in the genes responsible for blood coagulation and tissue inflammation to higher risk of severe disease in people infected with the virus. The study connected genetic sequences with the immune-system overreaction and blood clotting in the lungs seen in patients with the worst outcomes, which could help identify which patients will need the most aggressive therapy.

“The ability to process these gigantic datasets so quickly on PSC systems was critical to the success of our studies,” said Christopher Mason, who led the work along with Jonathan Foox and Cem Meydan.

Dynamics of Spike Protein Are Key to SARS-CoV-2 Infectivity

Anton 2 simulations of the SARS-CoV-2 virus’s spike protein have provided an explanation for the virus’s high infectivity that was not evident in prior, static images of the protein. Virtual spike proteins — the external “nubs” in the virus that first interact with host cells — in SARS-CoV-2 move differently than almost-identical proteins from SARS-CoV, which caused the 2002-03 SARS epidemic.

The simulated CoV and CoV-2 spike proteins behaved similarly when in their inactivated states. Once activated by encountering host-cell proteins, the CoV spike protein moved into a second inactive state. But the CoV-2 protein stayed active, helping to explain why SARS-CoV-2 is better able to spread than its earlier relative. The specific differences between the proteins may give doctors far better targets for therapy and vaccine development.

“I do not believe that we could have observed the crucial difference in the behavior of SARS-CoV and SARS-CoV-2 spike proteins using any supercomputer other than Anton 2,” said Mahmoud Moradi of the University of Arkansas, who performed the simulations. “Anton 2 at PSC allows [us] to perform microsecond-level simulations of large biomolecular systems such as spike protein within hours rather than months … That is exactly the type of simulations that we needed to run to be able to see the differences that we observed between the two viruses.”

Antibodies from patients that neutralized the SARS-CoV virus fail to affect the SARS-CoV-2 virus because of relatively small changes in a viral protein, according to a report from the Catholic University of America. Simulations on Bridges’s “large-memory” nodes as well as on other supercomputers demonstrated that the old antibodies could be engineered to treat or possibly prevent COVID-19.

“Without supercomputers provided by PSC and XSEDE this research wouldn’t be possible,” said Victor Padilla-Sanchez, who performed the simulations. “I am glad to hear that PSC supercomputers have gotten renewed NSF funding for the coming years.”

Padilla-Sanchez’s simulations of the antibodies docking with the SARS-CoV and SARS-CoV-2 spike proteins suggested that changes in the binding site of the SARS-CoV-2 spike protein prevented SARS-CoV antibodies from sticking to the newer virus’s protein. Small virtual changes in the antibodies gave them the ability to attach to the COVID-19 pathogen in the simulations, offering possible treatments or preventives for COVID-19 infection.

*Bridges and Bridges-AI are funded by the National Science Foundation. Anton was designed and developed by DESRES to execute molecular dynamics simulations of biomolecules such as proteins, nucleic acids and lipids orders of magnitude faster than was previously possible. The Anton 2 at PSC is provided without cost by DESRES for non-commercial use by the U.S. research community. PSC supports that community’s use of this resource with operational funding from the National Institutes of Health. 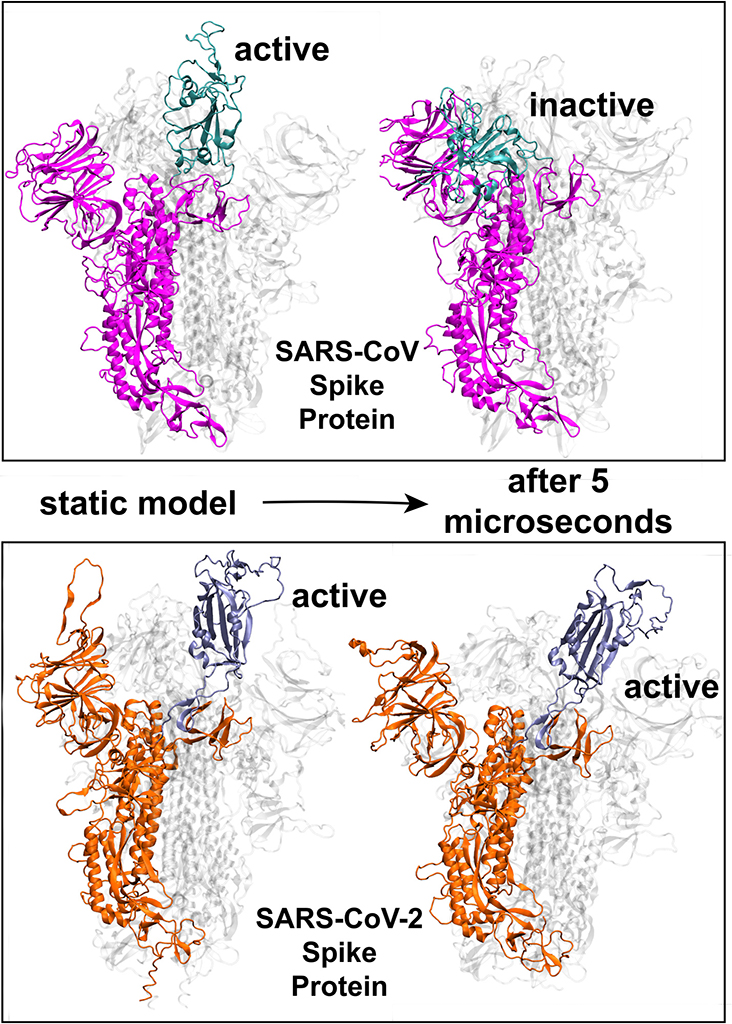 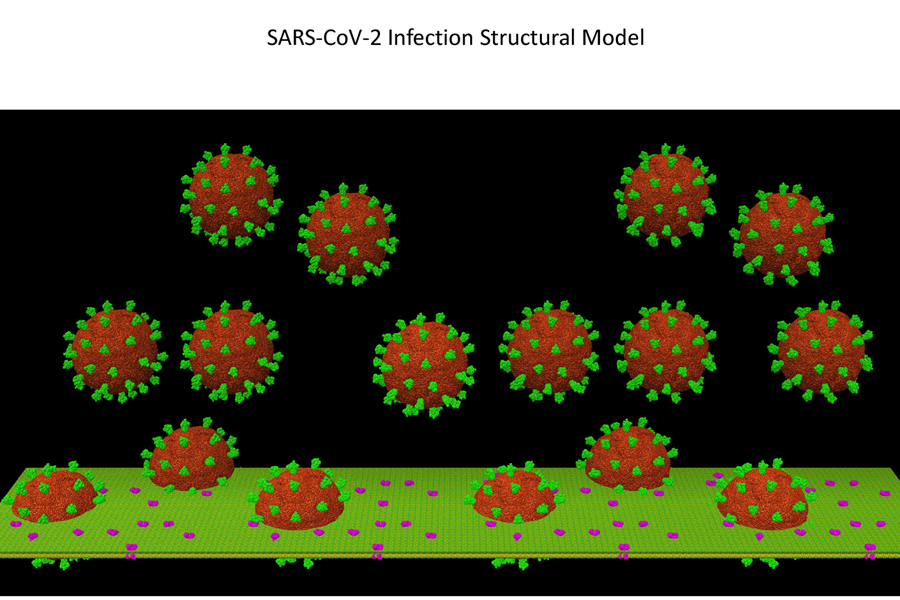 Structural model of SARS-CoV-2 infection. This structural model was built with UCSF Chimera using high-performance computers (Bridges Large and Frontera). The model shows 16 viruses, with the spike proteins shown in green (PDB ID: 6VSB) and an actual lipid bilayer membrane, with ACE2 dimers shown in magenta. All these structures are at atomic resolution. The length of the membrane is approximately 1 micrometer. 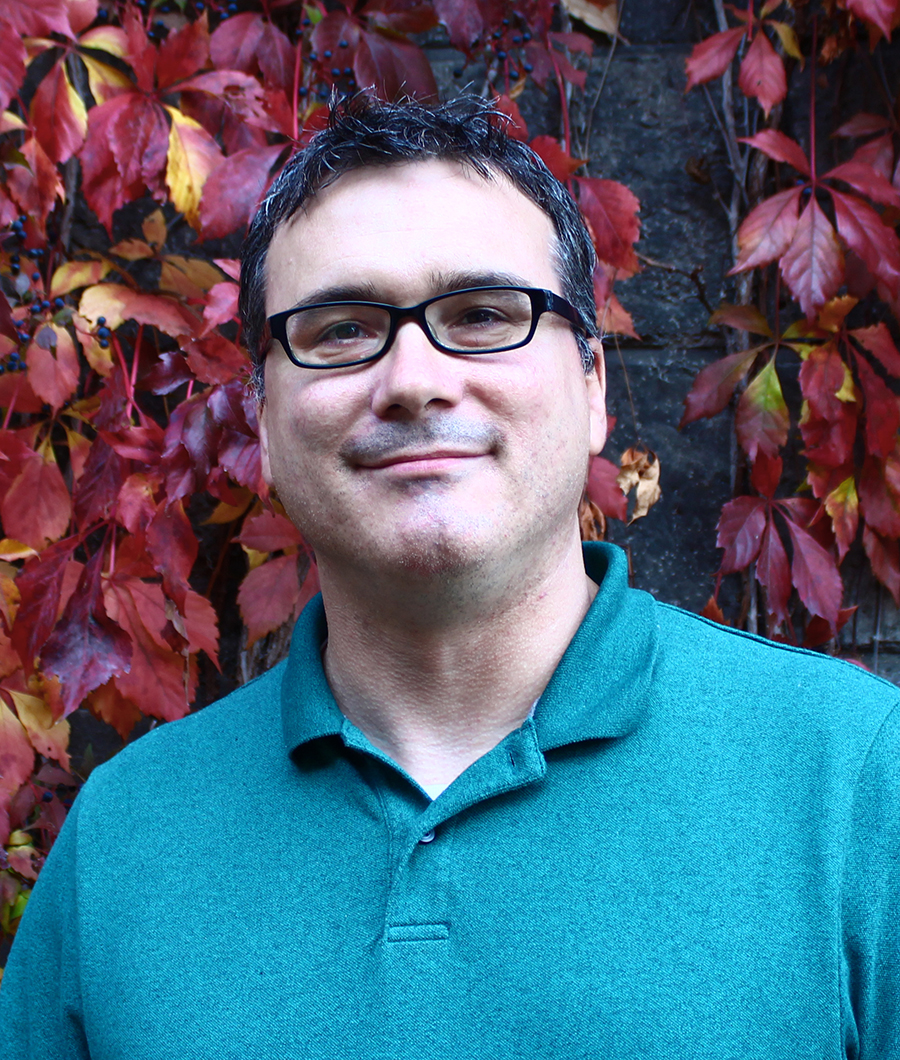 Before returning to PSC last year as director, Brown was associate director of research software development for McGill University’s Centre for Integrative Neuroscience in Montreal, where he led the development of the CBRAIN and Neurohub computer infrastructures. The system put neuroimaging, artificial intelligence, big data analysis and genetic data at the service of hundreds of neuroscientists in 32 countries. In his role at McGill, he also led a cross-department effort to fund, design and build a common computational infrastructure across faculty in medicine, marketing, psychology, computer science and agriculture.

Brown was an undergraduate in chemistry at Bethany College in West Virginia and earned his Ph.D. in theoretical chemistry at the University of Georgia. In 2009, he was embedded in the U.S. Government providing immediate response to the H1N1 pandemic and then took the position of assistant professor at the University of Pittsburgh Graduate School of Public Health before coming to the PSC to lead his research team.