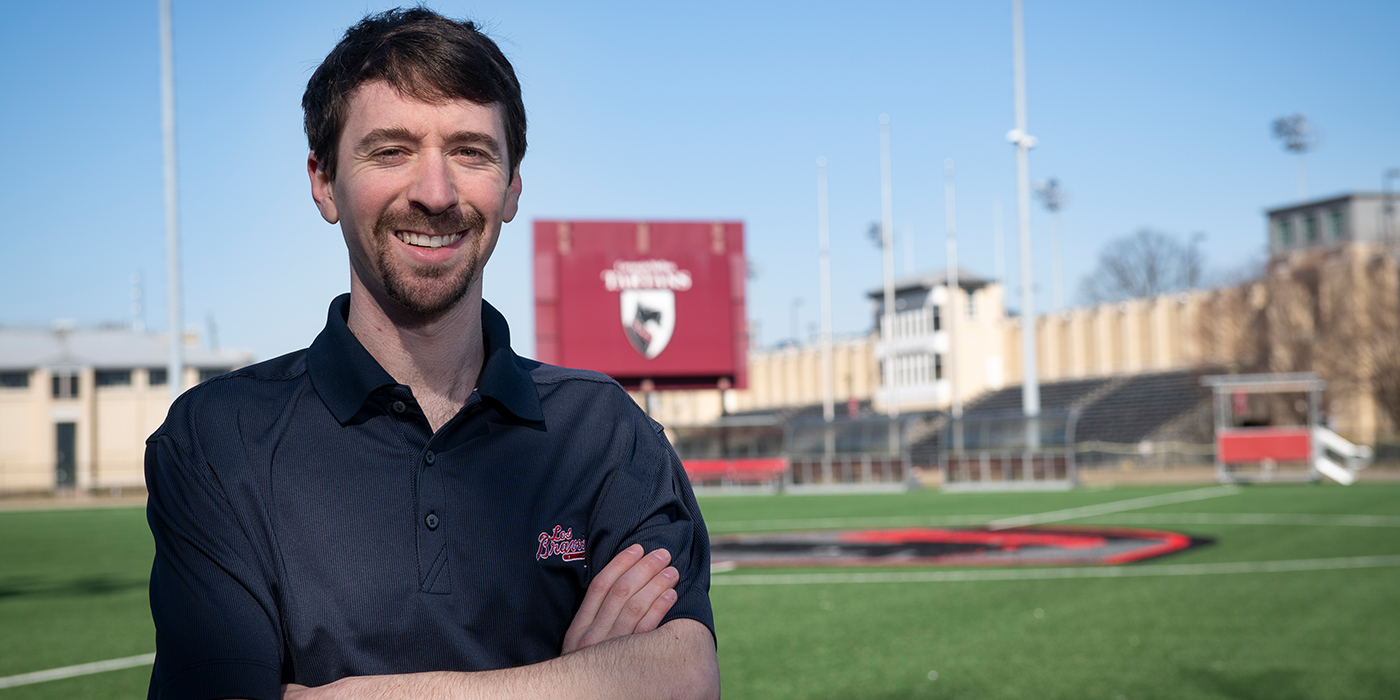 Evan Tucker Hits a Homerun with the Atlanta Braves

Recent Ph.D. graduate Evan Tucker has made it to the major leagues. In June, he joined the Atlanta Braves as a data scientist for research and development, all of which began with an unlikely internship experience.

When Tucker saw a job posting for a scout with the Braves, his hometown baseball team, he knew it was technically out of his league. On a whim, he submitted his resume and soon landed an internship with the team — though admittedly not as a budding baseball scout.

“A day after I submitted my resume, I got an email from the head of analytics asking if I’d be interested in an internship with them instead,” Tucker said of accepting the offer to join the Braves’ newly formed research and development office in the summer of 2018.

As an intern with the Braves, Tucker spent his days researching analytics, writing code, organizing and cleaning data, not unlike what his Ph.D. work measuring galaxy cluster masses looked like, but instead this research focused on what’s known in baseball as sabermetrics.

Sabermetrics analyzes data that can’t be derived “just from counting how many times you hit the ball when you come to the plate,” Tucker noted. A play on the Society for American Baseball Research acronym SABR, sabermetrics uses in-depth statistical analysis to evaluate player performance and to develop new playing strategies. Take a player’s batting average, for example, which calculates a batter’s value in earning a walk or in their ability to hit doubles, triples and even home runs. In this instance, sabermetrics looks at a much larger picture to show how a player with stronger hitting power can be more valuable than a player who has a decent batting average.

Today, every team in Major League Baseball has some measure of staff devoted to sabermetric-focused analytics. Teams like the Los Angeles Dodgers and Houston Astros have huge analytics departments, which are often credited for their 2017 World Series match-up.

The Braves’ focus on data analytics was fairly new when Tucker first joined the team. In fact, he was among the first crop of interns for research and development. Over the course of his internship, Tucker developed statistical frameworks, analyzing the team’s current performance and providing insight into how the Braves could use sabermetrics to better position players on the field, and worked on player development, determining how minor leaguers might perform when they reach the big leagues. Now, as a full-time member of the team, he’s continuing this work.

An avid baseball fan, working for the Braves has had quite a few other perks — like watching every home game from research and development’s right field corner office, meeting the team’s trainers and coaches, shaking hands with legendary former Braves’ players Chipper Jones and Fred McGriff and opening the door to a surprising new career path.

“Being able to work in baseball has always been a pipedream for me,” Tucker said. 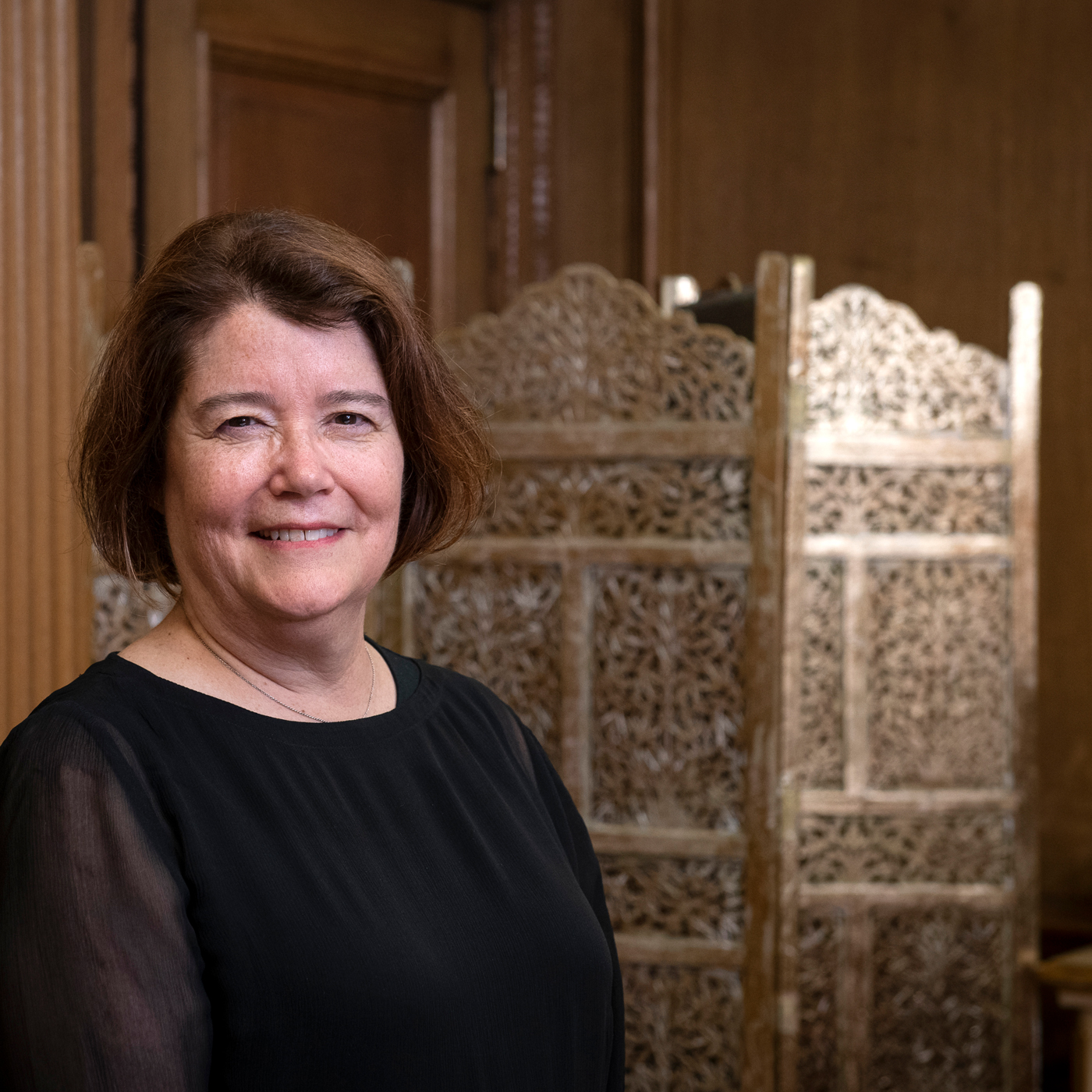 Alumna Patricia McBride received a 2018 Alumni Achievement Award in recognition of her work that has helped to further our understanding of the universe.

As it turns out, the most basic questions about the origins of the universe are some of the hardest to answer. As deputy spokesperson for the Compact Muon Solenoid (CMS) Collaboration at CERN, McBride is one of three global leaders managing the experiment at the Large Hadron Collider.

McBride has been a member of the CMS collaboration for more than a decade, serving as the head of the Fermilab CMS efforts and managing the United States CMS Operations Program, which oversees the country’s contributions to CMS experiment operations.

“When you understand more about the early universe, the nature of matter and the fundamental interactions of matter, you have learned something about how the universe works and its fundamental properties,” she said. “It is actually even possible to make some predictions on the possible fate of the universe.”

After completing her two-year term at CERN, McBride will return to Fermilab. She also expects to continue working internationally through her participation in the International Union of Pure and Applied Physics.

“We work to make science more inclusive,” she said. “We make sure that conferences rotate between regions, not just the U.S. or Europe. And we make sure there are women represented on committees and speaking at conferences. We weren’t trained to be diplomats, but we had to learn how to bring people into an inclusive culture.”

“Today I want to tell members about an outstanding woman in my district who is paving the way for women in STEM.”

That’s how Illinois Rep. Lauren Underwood described 2002 graduate Aria Soha in a speech on the floor of the U.S. House of Representatives this May. Underwood went on to praise Soha, who is an engineering physicist at Fermilab in Batavia, Illinois, as one of the many “hidden figures” in STEM worthy of greater recognition.

“The role of engineering physicist is hard to describe,” Soha said. “We’re the sort of people who get all those things done that need to be done.”

For Soha, this means an average day can be full of tasks ranging from finding a wrench to designing and building an enclosure for a calibration laser or troubleshooting a cryogenic system.

During the past year and a half, Soha’s job has been to oversee the installation of the Short-Baseline Neutrino Far Detector, nicknamed ICARUS, at Fermilab. The massive detector, which is 65 feet long and filled with hundreds of tons of liquid argon, is designed to catch a glimpse of one of the smallest known particles, the neutrino.

Billions of neutrinos pass through Earth and everything on it every second, but the small mass and neutral charge of these subatomic particles means that they rarely interact with other matter. ICARUS is designed to maximize the chances of an interaction by collecting many atoms of argon, which release charged particles when neutrinos collide with them. These charged particles pull electrons off other argon atoms as they fly by them, and the electrons induce a current on wires suspended inside the argon.

Soha’s dualistic job title of engineering physicist reflects the fact that she spends a lot of time “translating” between the engineers and physicists working at Fermilab, she noted.

“As installation coordinator, I get to hear about everybody’s systems and what they’re doing,” Soha said. “I really enjoy seeing the big picture and coordinating those things.”

At Carnegie Mellon, Soha spent three summers working in the lab of Professor Jeffrey Peterson building and testing radio telescopes. “Working in the Peterson lab was tremendous for me,” Soha said. “It really gave me a lot of experience.”

That experience on her resume set her apart from other applicants when she was looking for a job after graduation, Soha said. And once she landed a job at Fermilab, Soha said her Carnegie Mellon education was a big asset in helping her quickly get up to speed in her first role as an accelerator operator.

“It was easy for me to pick up the concepts that my job was trying to train me in,” Soha recalled. “I felt like I had a really good academic foundation.”

For Soha, having the story of her career shared in Congress was a “surreal” experience and a huge honor.

“I love my job,” Soha said. “I think it’s really cool that (Rep. Underwood) found that really inspiring and that she wanted to share it.” 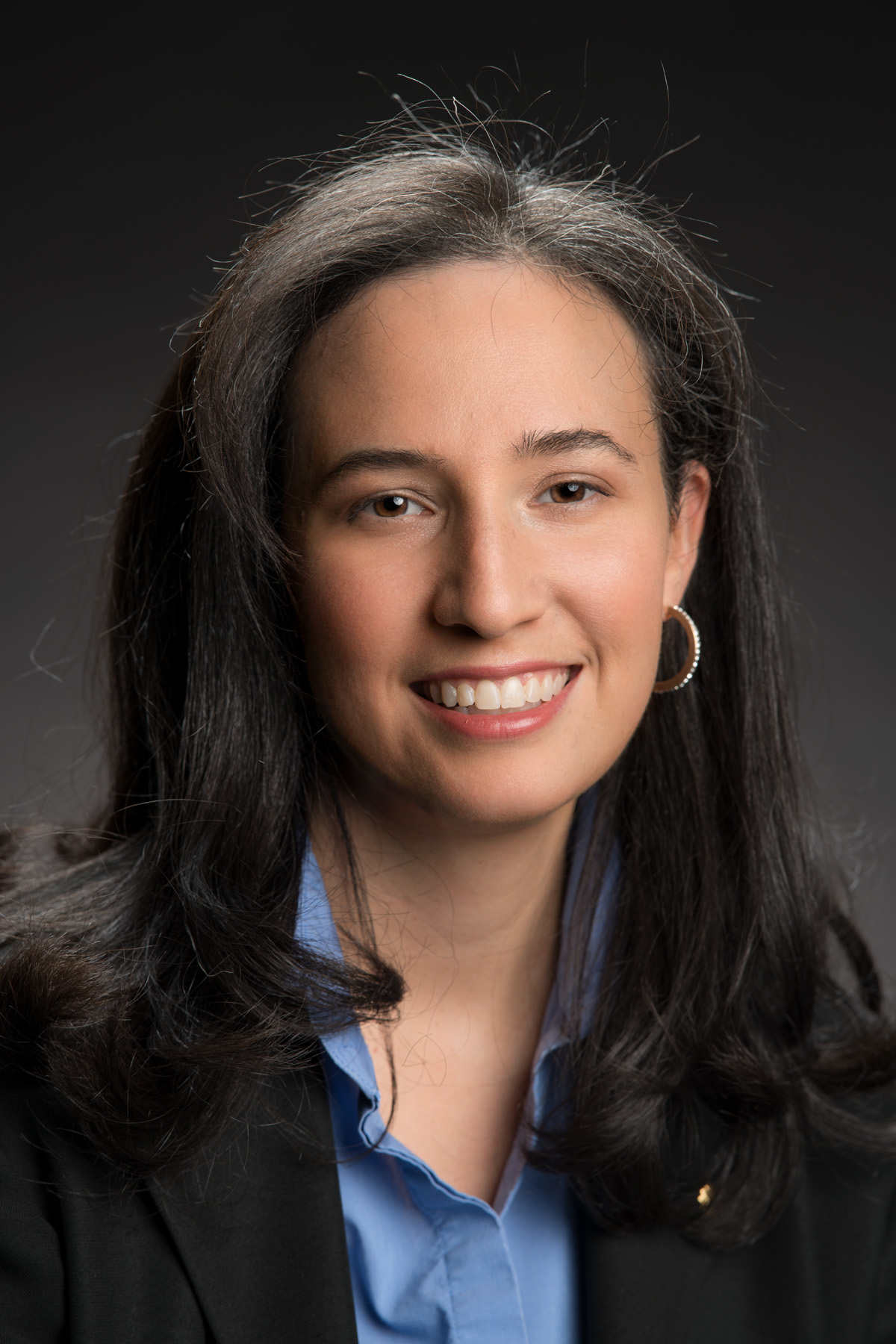