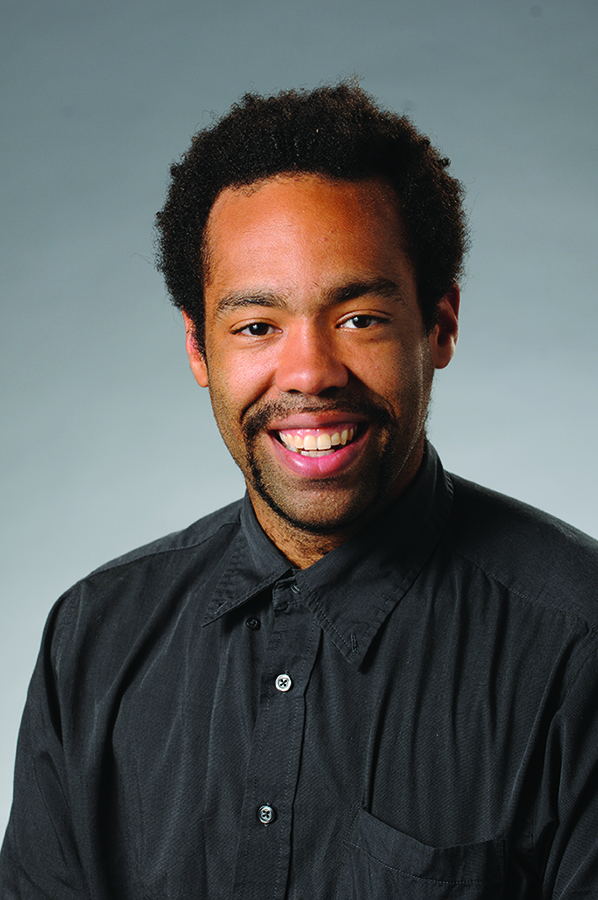 “With math and STEM playing a large part in our future, we need to make sure that significant parts of the population are tied to it.” 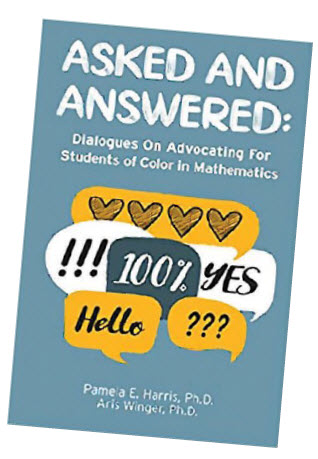 “Asked and Answered: Dialogues On Advocating For Students of Color in Mathematics” was self-published by Aris Winger and Pamela Harris.

Aris Winger was walking out of his junior year linear algebra class at Howard University when his professor, Cora Sadosky, stopped him to ask what his future plans were. He remembers voicing his intent to become an actuary.

Winger recalls her next words very clearly: “I think you could get a Ph.D.”
She then encouraged Winger to attend Carnegie Mellon University’s Summer Undergraduate Applied Mathematics Institute (SUAMI), where he saw what life as a doctoral student could look like.

“That’s guided me my entire life,” said Winger. “I didn’t even know what was possible for me — what greater power could an educator have than to look in a young person’s eyes and tell them you can be better than you ever imagined?”

That moment has stuck with Winger as he’s made his own venture into education where he’s made it a point to be that person for others, both as an educator and an entrepreneur.

Part of Winger’s motivation is what he describes as breaking down mathematics’ body-of-knowledge culture — the idea that math is an intangible and impenetrable institution. He believes that everyone can achieve quantitative literacy, if not quantitative expertise, but that some people have been more welcome than others in the discipline.

“With math and STEM playing large part in our future, we need to make sure that significant parts of the population are tied to it,” said Winger. “That means that the stigma of what mathematics is in society has to change.”

That’s why Winger does his part to uplift underrepresented voices and bring them into the mathematics fold.

Since 2015, Winger has returned to CMU as an instructor for SUAMI and the Summer Academy for Math and Sciences. And as an assistant professor of mathematics at Georgia Gwinnett College, Winger always makes himself available to his students.

Over the years, Winger has worked closely with Michael Young, a fellow alumnus whom he recruited to join Carnegie Mellon’s Department of Mathematical Sciences graduate program. They founded the organization MEDAL, Mathematics Enrichment Through Diversity and Learning, to help educational and professional institutions better support students of color and other marginalized groups in mathematics.

Part of their work has brought the pair back to CMU as mentors for the Tartan Scholars program. The program, which supports students who come from low-income backgrounds, has grown from 50 students in 2019 to over 150. Through MEDAL, Young and Winger provide the students with mentorship and resources to help them thrive at CMU.

“The students see this as a chance to transform the entire trajectory of themselves and their families. Our job is to support them in any way we can because it’s going to impact them for generations,” said Winger.

Winger further advocates for equity in mathematics with with another close collaborator, Pamela Harris, an associate professor of mathematics at Williams College. Winger and Harris, who is Mexican American, co-host the podcast Mathematically Uncensored, which centers around issues that they, as minorities, face in the discipline.

Together they have created a space to showcase their visibility in mathematics and share their lived experiences, but they wanted to find ways to get others to talk about it, too.

Last year, they led a four-part webinar series, Advocating for Students of Color in Mathematics, with the American Mathematical Society for over 250 mathematicians.

Unable to answer everyone’s questions in the series, the webinar later inspired their most recent project: “Asked and Answered: Dialogues on Advocating for Students of Color in Mathematics.”

Released in December 2020, the part dialogue, part workbook digs in to what people can do differently and the impact they can have on students of color to make them feel not only welcome in the discipline but valued and supported so they can reach their full potential.

“What we find is that what is needed to be done differently is not that much,” Winger explained. The biggest impacts, he points out, come from the smallest of changes such as watching what words educators use or comments they make in the classroom, adding language to a syllabus that makes people feel more welcome.

Since its release, Winger has heard of departments creating books clubs around the dialogues and even using it to help change their policies.

“It’s been fantastic,” Winger said. “The reception has been unbelievable. I couldn’t be more thankful.”

Aris Winger co-hosts the podcast, Mathematically Uncensored, with his colleague Pamela Harris where their “talk is real and complex but never discrete.” 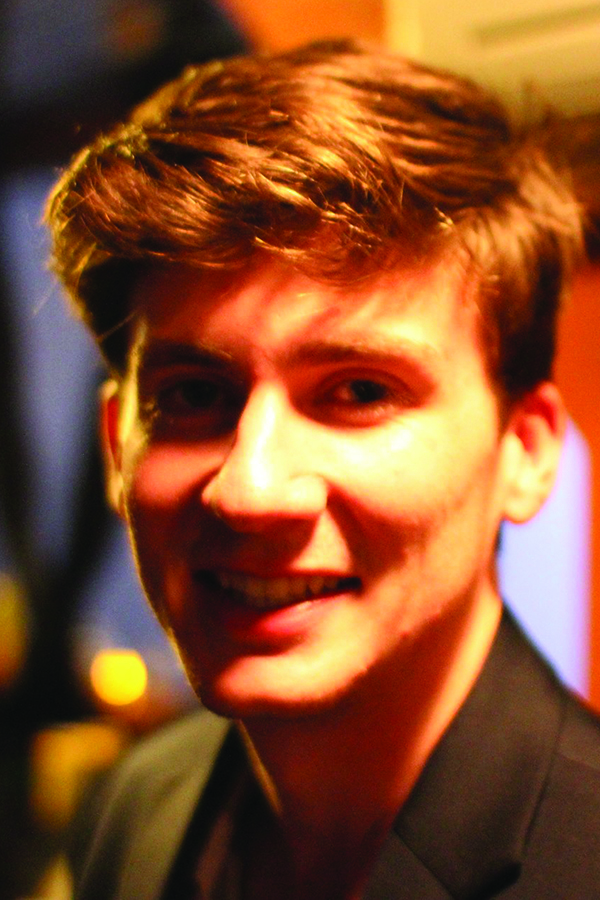 Cory Bird wanted to leave something meaningful behind for fellow and future generations of Carnegie Mellon students. So, as a fifth-year scholar, he founded the nooks project to create learning and collaboration spaces for students around campus.

Throughout his project, he worked with a number of individuals across the university to propose high-impact, low-cost renovations to student study spaces or ‘nooks’ that would improve the experience for students from various majors and backgrounds. To accomplish his goal, Bird took full project management control — getting plans drawn up that had to be approved by the university, securing contractors and then helping to oversee the work being done.

“Diving into foreign topics such as design, architecture and project management provided so many learning opportunities outside of my formal studies, which I’m incredibly thankful for,” Bird said.

Many of the renovations began after COVID-19 hit, meaning many students and faculty have yet to experience the newly enhanced nooks.

“I think it’s amazing how Cory led this enormous effort to positively change our campus,” said Bird’s project advisor and Assistant Dean of Educational Initiatives Ken Hovis. “It’s also great to know the university is still making significant changes to improve the campus experience for students even while many are remote due to COVID-19.”

The main spaces that were updated through Bird’s project include three spaces in Wean and Doherty halls. Bird also focused on updating furniture in the College of Fine Arts building’s main hall and the lower level and second level of the Cohon University Center.

In honor of his hard work and dedication, Bird was recognized with the Carnegie Mellon Alumni Association’s 2020 Student Engagement Award.

A true CMU student, Bird explored interests far and wide across the university. He served as co-President of Project Rwanda, a student-led group aimed at enhancing the ties between the CMU Pittsburgh and Africa campuses while working alongside primary and secondary school teachers in Rwanda; he also spent nearly two years organizing events to bring students together from the CMU-Africa, CMU-Qatar and Pittsburgh campuses.

Academically, Bird, a biological sciences major, enjoyed exploring the crossroads of his technical and social interests. While his studies focused on computational neuroscience, with a minor in environmental and sustainability studies, his undergraduate research experience later pivoted his interests toward astrobiology and planetary science.

After graduating in May 2020, Bird began working in product management at Cricut with aspirations to pursue a Ph.D. in astrobiology in the future. 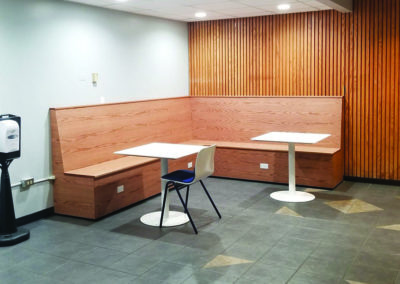 A new seating area in Wean. 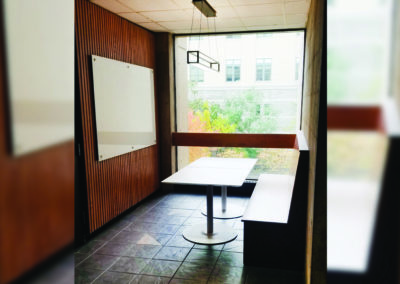 A cozy study space with a view. 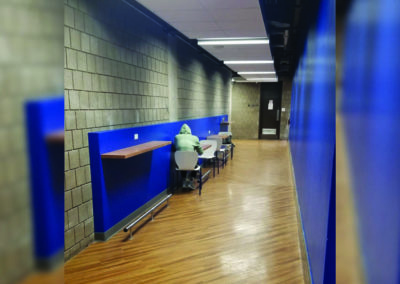 A bright update to the corridor with tables and standing workstations. 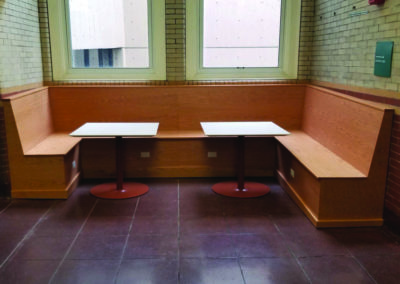